Sue Aikens, an American personality and television star fondly known for her show named Life Below Zero on National Geography Channel. She is a hard-working woman having a nomadic lifestyle.

Surviving in the savage parts of Alaska is not an easy thing to do. Despite living in a harsh condition of Alaska, she displays her courageous side of living in the remote areas of the place.

However, with her skills at hunting and fishing, she hosts a river camp where she deals with other hunters.

From her struggles to gather bullets and beer for survival, here are some amazing facts that you must know.

Who Is Sue Aikens? Her Wiki Bio, Age & Education

Susan Aikens AKA Sue, was born on July 1, 1963. She was born and raised in Mount Prospect, Chicago. Currently, the 57 years old is living in the wilderness of Kavik River Camp, Alaska.

She belongs to Caucasian ethnicity holding an American nationality. Her grandparents migrated from the Alpes of Scotland.

The Alaskan Hunter had a troubling childhood living in the urban areas of Illinois. She was raised by her parents until the age of 12, and unfortunately, they divorced.

Her mother moved her to a small village in Alaska, but shortly after, Sue’s own mother abandoned her in the wilderness of Fairbanks. Aikens survived all alone in the harsh environment while the place became her permanent home.

Talking about her education, she graduated high school from Lowell Whiteman School, after which she stopped pursuing her education.

Being a hunter takes a lot of hard work and dedication in order to survive. So, Aikens life long experience in the wilderness earned her a spot on the show “Life Below Zero.”

The show is all about the lives of 6 individuals who struggle to survive the cold and remote areas of Alaska. The documentary features Sue as one of the main cast while she made her debut back in 2013. 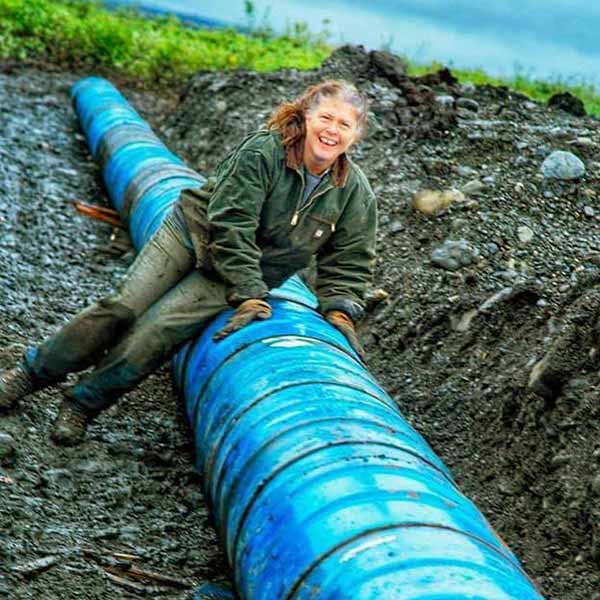 However, in 2010, she first made her debut in a reality television series named Sarah Palin’s Alaska. The series aired on the TLC network, where a former Alaska Governor hosted the show.

Later in 2011, she joined the cast of another reality show named “Flying Wild Alaska.” Sue received popularity from both of these shows, and since then, her net worth has been rising.

The unique way of surviving caught the attention of a large audience. These reality projects attracted not only the fans but the media as well.

Besides these three shows, Sue Aikens guest-starred in various other television series like Today, Access Hollywood Live, Fox & Friends, The Joe Rogan Experience, and many more.

Sue Aikens Rise to Fame In Life Below Zero

Meanwhile, the big breakthrough came in 2013 when Life Below Zero premiered on May 19, with Sue being one of the main casts of the reality show.

The show is all about the daily struggles of people living below zero conditions in the freezing environment of Alaska. The reality show features daily and seasonal aspects of people who try to survive the first atmosphere of the remote areas of the world.

The series is in its 10th season, having large followers and fan base throughout the times.

The wilderness of Alaska is filled with dangers, and the place can be quite threatening as well. With the varieties of violet and wild animals, one can only be careful about what’s lurking behind the shadows.

Similarly, Sue Aikens faced dangers like these often, and she has somehow managed to survive it all.

In 2007, a wild grizzly bear attacked Sue from behind. She was working at the river while the bear attacked her in surprise. The unexpected event occurred so fast that she could not defend herself.

Once the bear left her alone, Sue managed to drag herself to the camp and tend the wounds alone. She returned back with a gun, and she managed to kill the bear herself.

Sue could not move and stayed at the place for over a week until help arrived. On the 10th day, a local pilot found her lying down cold and rescued Sue, who barely survived the fierce attack.

She escaped a near-death condition from the fierce attack from a grizzly bear.

In February of 2017, Sue Aikens made a bold move filing a lawsuit against the producers of Life Below Zero. She had serious problems with the contract claiming that the contract caused her emotional stress while being quite onerous.

According to her complaint, the producers didn’t approve any protective helmet and faced masks while she was filming dangerous scenes without thinking of her own safety.

She had a tragic accident when the snow machine which she was driving went on to crash. Despite the incident, the crew members behind the scenes did not take any immediate measures while she kept struggling with injury.

Nothing like the smell of Jet Fuel in the Mornings! Thank you Taylor Hutchins for taking some amazing photos of Life here at Kavik! #warbirds #evertsair #kavikrivercamp #mylifeisawesome @taylorhutchins_photography @sueaikens

Also, the producers took no action to call a rescue airplane at the time of injury. This was all done for the sake of thrill and entertainment for the viewers.

Is Sue Aikens Still Cast Of Life Below Zero?

Yes, it’s true, Sue Aikens is still on the reality television show. She has not been able to come to a decision on whether to leave or continue being the cast of this show.

Having all these legal issues and difficulties with the producers of Life Below Zero, Sue Aikens decided to leave the show. Her fans and the viewers also showed their concerns and suggested her to leave.

Despite all the ruckus, Sue is still promoting the reality series in her social media accounts. The legal case is still running, so she intends to stay before the case comes to a conclusion.

Despite being a popular personality in a reality television series, Sue Aikens also hosts the Kavik River Camp. It has been over 10 years since she operated the camp.

The place is located in Arctic National Wildlife Refuge, which is 500 miles away from the nearest city. The camp provides many activities for hunters like hiking, exploring, fishing, and hunting during the seasons. 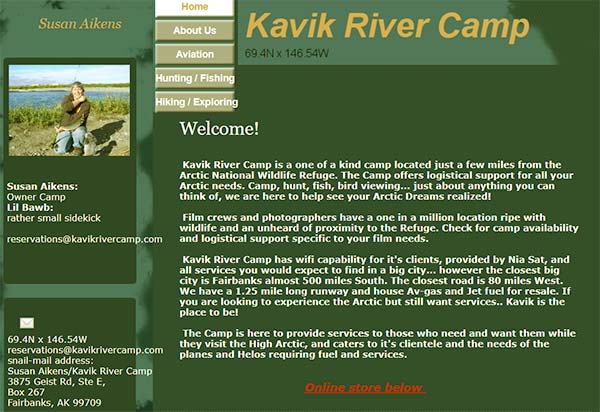 It’s the best place for tourists to have a different type of adventure. Also, Sue is not that isolated from the technologies while she has a cell phone, internet service, and a generator for her camp.

Aikens guides brave adventurers who usually come in the hunting season, which costs around $350/night at the Kavik River Camp.

Sue Aikens started her career as a television personality since 2010. She has been active in this entertainment business for a long time now. Over the years, Sue has gathered a huge fortune to her name.

Being a survivor had paid her with a handsome salary for all her troubling efforts. So, Sue Aikens’s net worth is estimated to be an outstanding figure of $600,000 from her appearances in several television shows and projects. 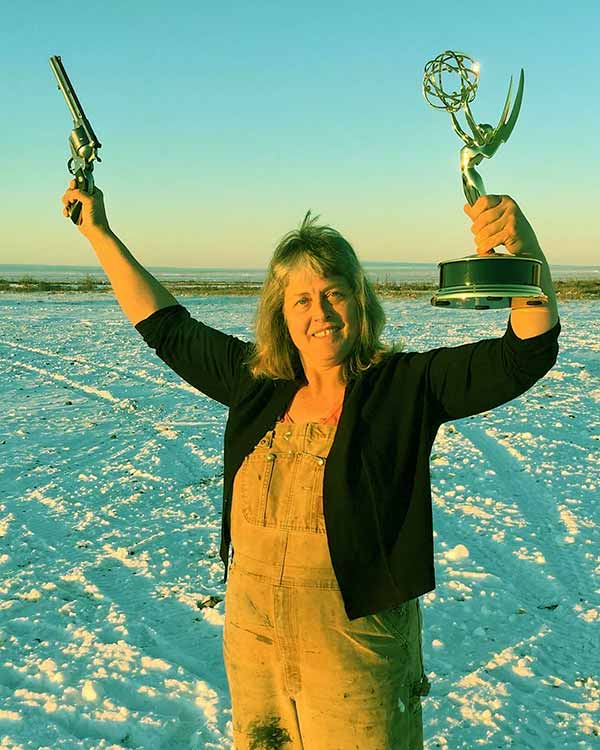 Although her annual salary from television projects is expected to be around $200,000 annually. Besides that, she also runs the Kavik River Camp, which offers her more options for income.

The hunter earns a huge amount from the camp and the accommodation for which the travelers are charger $350 per day.

Sue Aikens had to suffer a lot of tragedies in her adult life with not only her injuries but with her married life as well. She married a total of 3 times in her life.

Amidst the marriage disaster, Sue is still positive about her relationship status in her life.

Sue Aiken’s first husband died long ago because of the brain tumor, leaving her all alone while her second husband faced a similar fate.

Her second husband, a British man named Eddie James Aikens. The couple married on June 13, 1987. Their marriage lasted for almost 17 years while they lived in Portland, where James pursued his profession as a barber.

Unfortunately, Sue Aikens and Eddie divorced in 2004. She returned back to Alaska after her marriage dissolved. Soon after, in 2009, Eddie James passed away.

Finally, she married for the third time, but her third husband left her for a younger woman. Concluding her final marriage did not last long, Sue’s third marriage turned to a disaster.

However, Aikens’ personal details are kept private, giving only a little glimpse of her current relationship information. The Alaskan hunter is rumored to be dating Michael G. Heinrich, who is an electrician by his profession.

Sue Aikens had two children with her second husband, Eddie. The couple shared two children: one son and a daughter, who are now in their thirties. 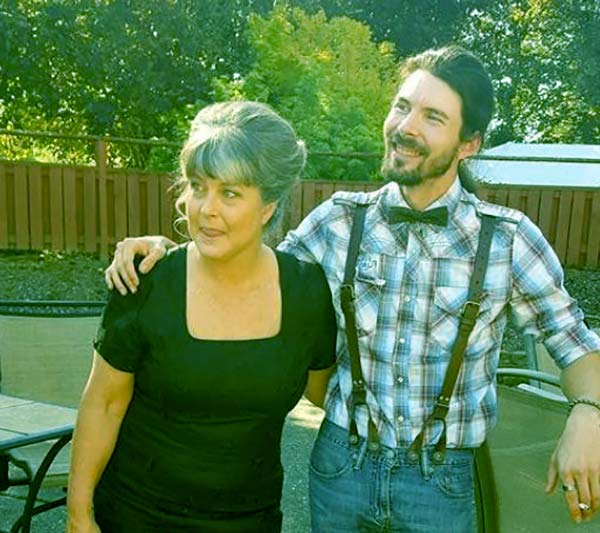 Caption: Sue Aikens with her son

Both of them have their own married life, but they live far away in an average life in the lower United States. They had no intention of having a nomadic lifestyle as their mother, so they decided to move on.

Despite that, Sue’s children often pay her a visit to Alaska. Her son married in September of 2016. 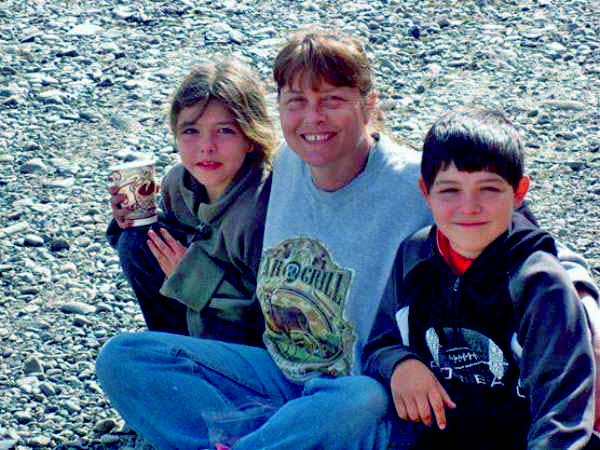 Caption: Sue Aikens with her grandchildren

Also, she has two grandchildren, and they keep in touch via wifi network and her satellite phone. Recently, she received a cute puppy as a gift from her grandson and granddaughter.

Lil Bawb and I cant wait for my newest grand daughter Amelia to arrive! I may not post much until she makes her diva-appearance, but know i am thinking of you all. ❤️🥰

Posted by Susan Aikens/Life Below Zero on Thursday, January 23, 2020

Despite living in remote areas of Alaska, Sue Aikens is very active in social media. She is famous on her Instagram, and Twitter accounts have almost 80K followers combined.

Posted by Susan Aikens/Life Below Zero on Sunday, February 9, 2020

Usually, she updates her daily life activities on her accounts, but besides that, she also connects to her family using Instagram and Twitter.

With the facilities of having Internet in her camp, she can reach out to her fans and followers about her struggles in Alaska.