If you like to keep the latest updates of drag racing, then you might even watch the show “Street Outlaws” on Discovery Channel. This means, you know, Kye Kelly, the famous car racing driver. But there is always more of the story behind the camera.

Discovery Channel brings the reality show “Street Outlaws” among the people who have a passion for racing. The show is all about street racing without any rules. Who is Kye Kelly?

Here we got all the detail of Key Kelley. Take a look.

Where is Kye Kelly Hailed From?

Kye Kelly is one of the main cast members of “Street Outlaws”. For Kye Kelly, car racing is not a game, but this is his dream job. Kelly was born on 18th May 1985. Kelly was born and raised in Magnolia, Mississippi, the county seat of Pike Country.

Growing up in Southern Mississippi, Kelley has been racing since the age of 14. He began with dirt bikes and switched to faster and faster cars. Right out his college, Kye Kelly worked in the oil fields to support his family.

Kye Kelly follows his heart, began racing in his hometown in New Orleans. He is a professional car driver and known to have the quickest street-car in the nation. Kelley has a 90s era Chevy Camaro, which he named ‘The Shocker.’

Never forget where you came from!! 👊🏽

Kelley rose to fame when “Street Outlaws” cast Shearer put a public inquiry to find out who is the fastest man was at “Da’s Pad,” one of the most famous streets of New Orleans.

Kye first raced car was Chevy II Nova. In 2015, he raced a car with Daddy Dave. At the event, he won and took down some of the significant drivers’ names, including Big Chief and Bobby Treadwell.

Kelley Used to work as a Superintendent

Before he became a part of the “Street Outlaws”, he was the superintendent of a Petroleum Refining Factory. In the beginning, he worked as a fire watching for $10 per hour.

At the time, he sat and watched for a fire while welders are welding. He was not satisfied with his job, and eventually, he became a superintendent after a decade. Kye had 250 workers under him, as superintendent.

When not racing, Kye goes for hunting in the forest as well as fishing. Back in 2018, he took a selfie of his first deer hunting and shared it on his social media. On the caption, he wrote, 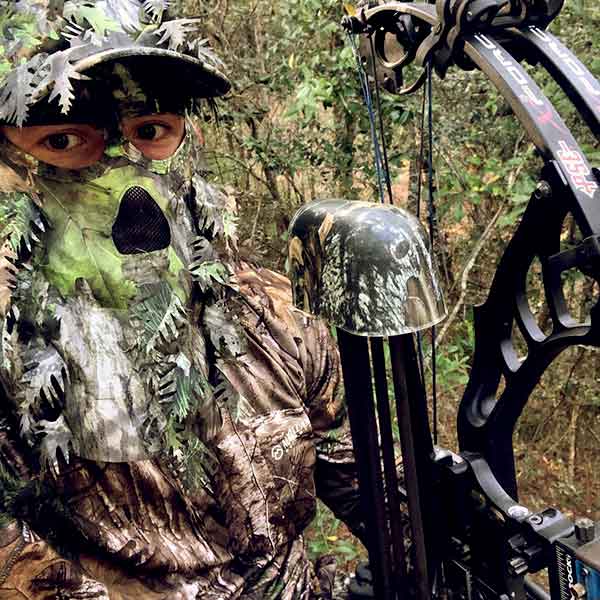 Caption: Kye Kelly shared his first experienced deer hunting in 2018 with his fans

Furthermore, he goes on the sea with his girlfriend, Lizzy Musi, for fishing. He even posts numerous pictures of carrying the giant fishes on his social accounts. In 2018, he went on a trip alongside his girlfriend and swampstuds and caught a monster fish.

On Instagram, he shared a picture of himself with one of the swamp studs members and captioned it,

“Smoked me a monster alligator gar last night.” Take a sneak peek below. 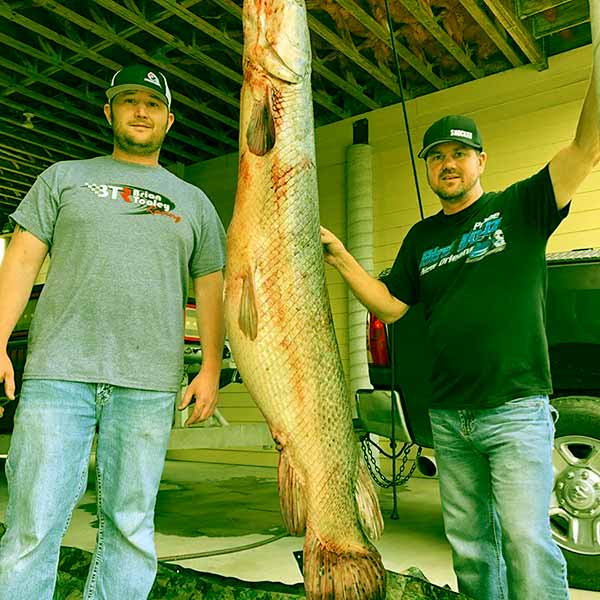 Caption: Key Kelley caught a giant fish and clicked a shot with it along with one of the members of

Kye Kelley ‘s Dog Has its Own Social Account

Kye Kelly is a huge fan of the French bulldog, a breed dog. Kelley and his girlfriend Musi welcomed a new family member back in June 2019, a dog named Biggie Smalls.

They get a cute little Frenchies from Famous Frenchies of Norcal. The couple even shared the first photo of their dog on each Instagram.

Kelley wrote on the caption, 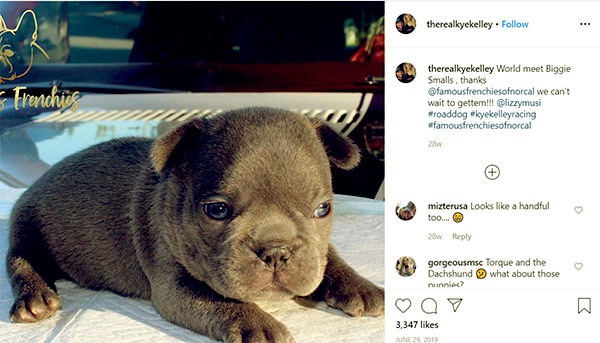 In fact, this little cute Biggie Smalls has its own Instagram that is managed by Lizzy Musi and Kye Kelley. It’s Instagram goes by “biggiesmallz_01” that has over 1400 followers. Bigge Smalls Instagram is loaded with its pictures. 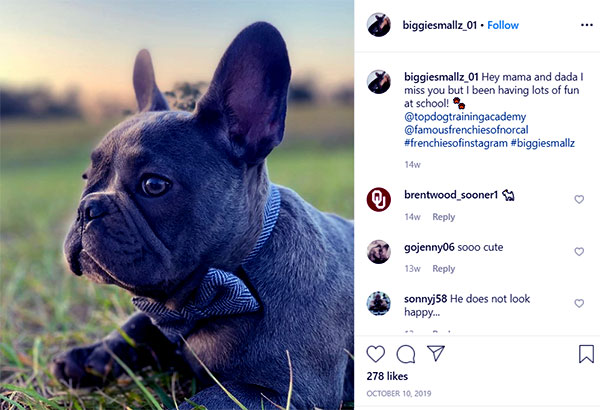 Caption: Biggie Smalls has its own Instagram that is managed by Lizzy Musi and Kye Kelley

Kye Kelley is in Love with Racer Lizzy Musi

The “Street Outlaws” star fell for a fellow racer, Lizzy Musi. Kye isn’t shy to express his love for his girlfriend on social media. He shares numerous pictures of blonde car racer on his Instagram. Even they go out for dinner or vacation to spend some quality time with each other.

In October 2019, Kelley went out for dinner with his lady at Don Jose Mexican Restaurant. He took a snap of Lizzy and posted on his social media and stated, eating at a Mexican restaurant with this pretty lady. 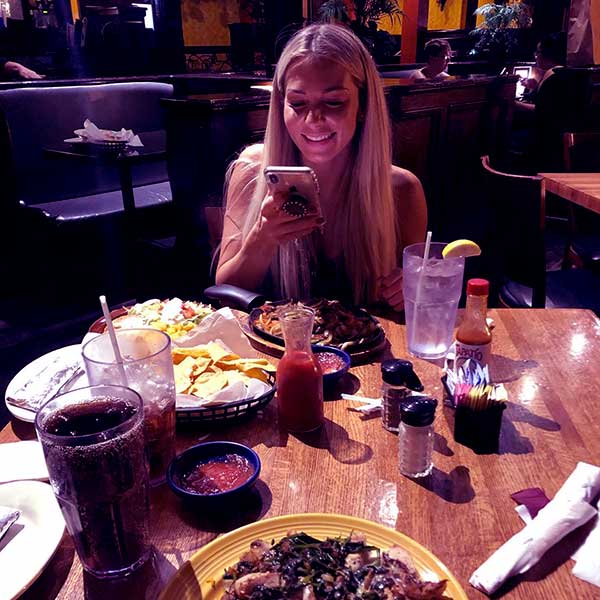 Caption: Kye was eating a delicious meal with his love, Lizzy

In this picture, the table is filled with a delightful meal while Lizzy was busy checking her phone. Looking at her face, it seems like she was enjoying her time with Kye.

Kye Kelley is back with New Series, “Street Outlaws: Fastest in America.”

This show will feature drivers in the team from different states that include St. Louis, South Carolina, Kentucky, Detriot, New Orleans, Texas, Memphis, Mississippi, and the Northeast. The team that won will receive $100,000.

The Street Outlaws: Fastest In America was aired on Monday, January 20, at 8 pm on Discovery Channel. The network said that it was the highest payout ever in the street racing history.

Kye Kelly gained name and fortune through the racing. His worth steadily increased after he became part of Discover’s reality show “Street Outlaws.” Back in 2019, Kye Kelley’s estimated net worth was $500,000, according to the relevant source. So, What’s the figure for his annual salary?

Well, Kelley makes annually around $150,000. In 2020, Kye Kelley’s net worth is believed to be $1 million, which is quite impressive. His net worth is undoubtedly increasing this year because he is a cast member of  the new show “Street Outlaws: Fastest in America.”

In addition to his career, he is an engine builder and entrepreneur. He has his own merchandise where he sells apparel like hoodies, sweatshirts, hats, and other items.

So guys, if you are a die-hard fan of Kye Kelly, then don’t forget to watch the show.