While most of the celebrities earned fame and fortune from their works in the Hollywood industry or other fields, but the celebrity’s children became an interesting topic among the people due to their parents’ popularity or controversy. Similarly, Vanna White’s daughter Gigi Santo Pietro became a celebrity because of her mother, who is an actress and TV personality.

So, who is Vanna White’s daughter? How old is she? How does she look now? Here are the facts you need to know about Vanna’s daughter Gigi Santop Pietro.

Gigi Santo Pietro is not a Teenager Anymore

Gigi Santo Pietros was born as Giovanna to parents Vanna White and George Santo Pietro in 1997, which means she will be turning 23 years old in 2020. She was born and raised in the USA. Furthermore, we found her mother wishing her a happy 21st birthday on 2nd July in 2018. So it is safe to assume that July 2nd is her birthday, and she is currently 22 years old. In case we don’t remember until July, we wish Gigi a happy 23rd birthday in advance.

Happy Birthday to the most beautiful girl in the world, my daughter Gigi! I love you! ❤️ #motherdaughterlove #celebratingtogether #strongbonds

After graduating from high school, Gigi enrolled at NTU’s prestigious Tisch School of the Arts in 2015 and completed in 2019. She has a passion for photography. She joined the NYC school of photography and imaging. 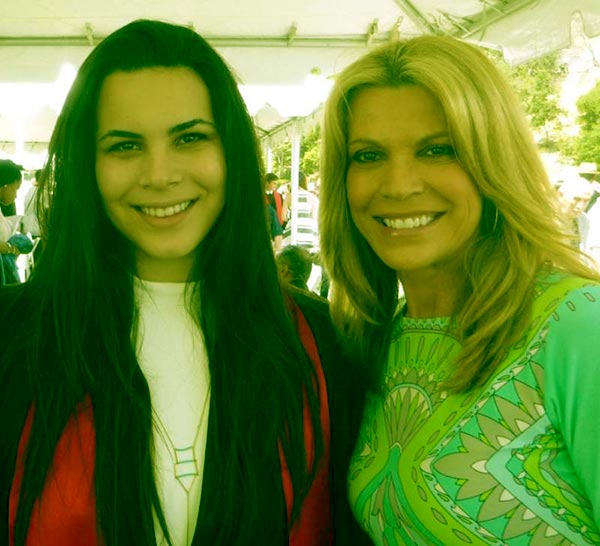 As a kid, Gigi posed on several red carpets with her mother and brother as well. in recent years, Gigi has taken a step back from the spotlight.

Gigi’s mother, Vanna White, is well known for her work as co-host in the long-time popular show “Wheel of Fortune.” She has been hosting the show since 1982. Before joining the show, she worked as a professional model. 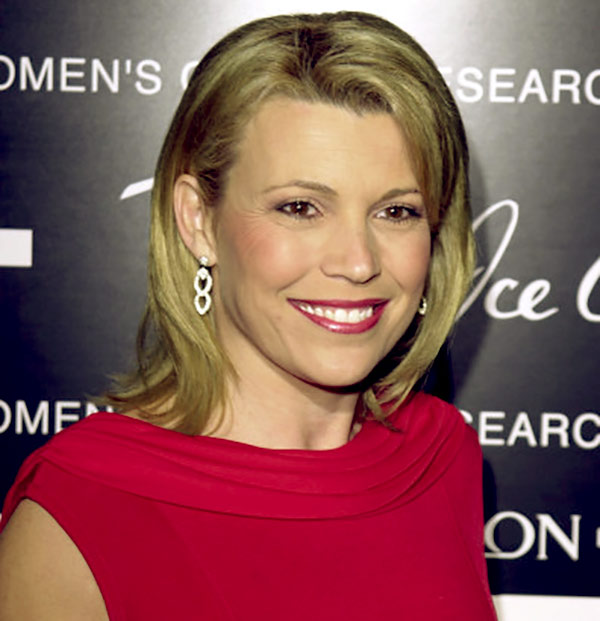 Vanna has modeled for many top brands and later switched her career to the film industry. Before making her debut on TV, Vanna White was a contestant in the Miss Georgia USA 1978 pageant. White made her first appearance in a game show ‘The Price is Right‘ in 1980 as a contestant.

White has a guest appearance on television shows such as L.A. Law, Super Show, Simon and Simon, Full House, and in movies like The Final Insult, Double Drago, and Indecent Proposal. In addition to her career, she has authored her autobiography book “Vanna Speaks!” published in 1987.

Gigi Santo’s father George Santo Pietro is a restaurant owner. Her father is of Italian descent and holds an American nationality. Reportedly, her father has owned a few restaurants across the city. 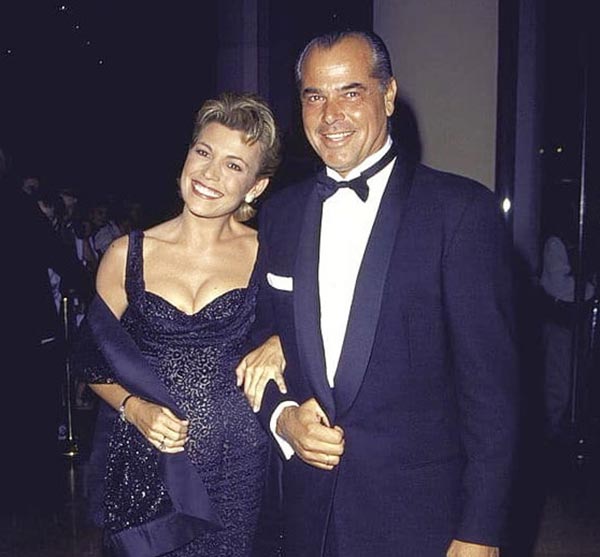 As per sources, George has dreamed of becoming a successful businessman and started working at a tender age. Eventually, his hard work paid off and established his empire. George is a restaurateur, real estate developer, and manager.

Further, he tried his luck on-screen and appeared himself as a dolly grip on several movies from 1997 to 2003.

Gigi Santo Pietro has a Brother

Giovanna is the younger sister of Nicholas Santo Pietro, aka Nikko. Nicholas was born in 1994, and he is now 26 years old. Like Gigi, her brother rarely makes his appearance on the camera. 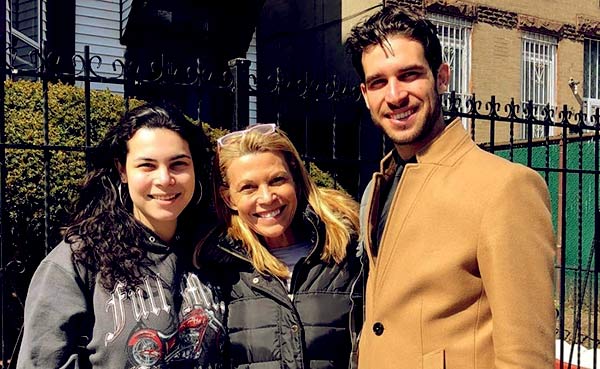 Caption: Gigi with her mother and brother

Back in 2018, Vanna White shared a photo with her son, which went viral on the internet and received good comments as well. Her mother posted a family photo on her Instagram in early January with a caption. She wrote,

According to the National Enquirer, it is said that her brother, Nikko is a then-38-year-old monk.

Gigi was just five years old when her parents divorced. Vanna White and George Santo exchanged the wedding vows in December 1990. But sadly, she miscarried the child that she announced her pregnancy on the show.

The couple ended their marriage after 12 years. However, the reason for their divorce is still unknown. Some sources revealed that the cause of their divorce was different interests. However, Vanna and George both are taking care of their children.

Vanna was engaged to late actor John Gibson in the 1980s. Her fiance was killed in a plane crash in the year 1986.

Her Mother is Dating Again

After the tragedy, she found love again and eventually engaged to businessman Michael Kaye. Unfortunately, the couple called off their engagement after a year, citing poor timing. However, White managed to find happiness after so much heartache. 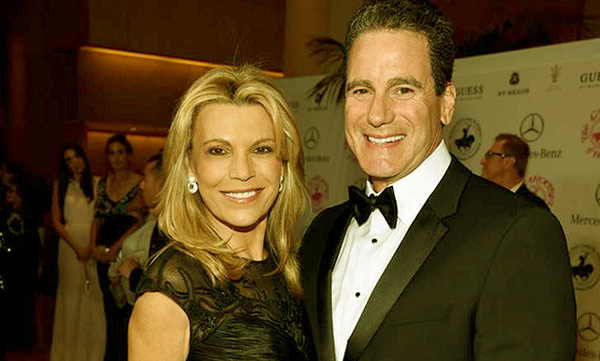 In 2012, one of her friends introduced her current partner, John Donaldson, who is a contractor. She gushed about him with Closer Weekly, saying,

“he’s kind, understanding, and lets me be me.”

Happy New Year from Our Family to Yours!

Gigi’s mother and Donaldson have been dating for more than five years, but there is no sign of their marriage yet.

How Much is Gigi Santo Pietro’s Net Worth?

Vanna’s daughter is just starting her career. She has earned a degree in Photography from New York University and is now working as a photographer. Aside from her work, she is really into art and drawing. She has even featured her works on her own website.

Though it is not revealed how she makes money from her photography, according to Glassdoor, the average salary of a photographer is $30,367 in the United States. On the other hand, Vanna White enjoys a net worth of $4 million that she garnered from her career.

Wheel without Pat is like a word without vowels. I’ll fill in the blanks until you return. Rest up and we’ll be solving puzzles in no time. (Don’t worry, your job is safe! Well, pretty safe.)

Furthermore, her mother uses her income to invest in real estate like apartment buildings and flipping houses. Back in 2017, she listed her Beverly Hills on the market for $47.5 million.

She does have an Instagram account that previously used to be private but now is open for everyone to check out. Feel free to have a look; the user ID is; “gigisantopietro”

Do you think I could sell this Account if diplo follows me? Any takers ?

Gigi Santo Pietro’s brother Nicholas Santo Pietro, aka Nikko, has an account on Instagram where he shared numerous pictures of himself and his friends.

Here’s where you find the nectar on the Island of Hawai’i!! There are no pictures of this place because who needs a camera in the face of such beauty. Please let me describe the steep descent, only accessible by hike. I started at the top and entered a valley that looked like a different planet. I was surrounded by lush tropical flora. Far down was a river that dipped low in the landscape and met the ocean. Imagine immense cliffs in the distance that stopped at the ocean with a mysterious white mist that tints the hillside. This was Punalu’u Beach. Have you been high on life before? I felt a feeling of bliss and wonder the moment my feet met the black sand. This experience made it worth flying over the Pacific. Shout out to my hiking buddies @codie_coyote @_carlos.danger Shout out to mom @officialvannawhite #punaluu #hawaii #withmygirl #travel #newyear #tropical #traveljournal

Additionally, she has her own website, where she shares her works. She is a huge fan of musician Diplo and shared a photographed alongside with her two friends.

Does Gigi Santo Have a Boyfriend?

Many people are wondering to know if Vanna’s daughter, Gigi, has a boyfriend or not? Well, we couldn’t find any info regarding her current relationship status. The 23 years old photographer is busy in her profession. She is probably single and more focused on her career rather than finding a perfect partner. She does seem close with a Jack Owen in her Instagram, but we doubt he is anything more tha a very good friend to her.

Gigi is an Artist and Art Admirer

You don’t have to look too much into Gigi’s social media profiles to learn that she is an artist and an admirer of all kinds of visual arts. In her Instagram profile, you will find mostly unrelated photos and pictures of artistic nature instead of selfies that are common for a girl her age. She also has her website, ‘gigisantropietro.com.’ You can have a look at yourself some unique drawings, sketches, and pictures.

Unlike, Gigi, we are real slobs when it comes to art, so we did not get much idea and details on what kind of an artist she is. If any of you have an idea, you can tell us in the comments.