We are here talking about the WWE wrestler Raymond Rowe. Raymond is signed to WWE and also performs on the Raw Band under the ring name Erik, as one of half of the tag team, The Viking Raiders. So far, when did he start his career in wrestling? Who is his wife?

If by any chance, you here do not know much about Raymond Rowe, then the chances are that when you google his name, you will learn about another Raymond Rowe. Mostly famous by his alias ‘DJ Freez,’ a man by the same name, ‘Raymond Rowe‘ was found guilty of the murder of a 25-year-old school teacher, Christy Mirack, in 1992. He was apprehended only 25 years later in 2017 through advanced DNA testing and other forensic technology.

Now that we have that possible misunderstanding out the way. Read on to find out about Sarah Logan’s husband, Raymond Rowe. Also, take a sneak peek, the facts that are given below.

Raymond Rowe is from Cleveland, Ohio

Raymond was born on August 21, 1984, in Cleveland, Ohio, which makes his age 36 years old as of 2020. Rowe was born and brought up in Cleveland, along with his siblings, but Rowe has disclosed any information regarding his family, parents, and siblings. 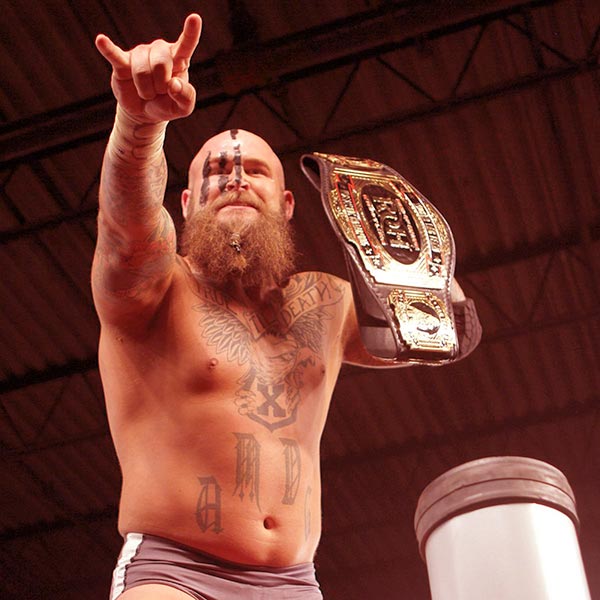 Caption: Raymond Rowe is a wrestler

Similarly, Rowe’s educational qualifications, such as the school’s name and the university, are not known. Talking about his physical stats, he has a towering height of 6 feet 1 inch and a weight of 112 kg.

Raymond Rowe began his career in his teenage years and was trained by Josh Prohibition and Lou Marconi. Rowe debuted on the independent circuit in May 2003, where he performed until 2013.

Ten years later, he signed a deal with WWE and then debuted in Ring of Honor in 2013 and lost against Bobby Fish. Following that, Rowe returned to ROH in 2014 and performed until 2017. In 2015, Rowe and Hanson (Todd Smith) made debuted at Pro Wrestling Noah, where they defeated Suzuki-gun.

In early 2018, he signed a contract with WWE and then, he and Hanson made their team called the War Raiders. The War Raiders performed against The Undisputed Era at NXT Takeover, where they won the NXT Tag Team Raiders.

Raymond Got Injured in 2015

While playing for ROH, he was severely injured in a motorcycle accident. He was out of the wrestling ring for several months. He has been wounded in several parts of his body that include severe bruising, lacerations. Also, Rowe sustained a broken arm that required surgery and rehabilitation. While he was recovering from the injuries, he hasn’t set a date for his return. Also, his fans weren’t sure about his comeback.

The NXT star married wrestler Sarah Bridges aka Sarah Logan, on December 21, 2018. It’s been two years since the couple married and living happily together. Below is a video of their Viking marriage.

Reportedly, Rowe and Logan began dating in the mid-2010s. Several months later, Rowe proposed to Mae Young Classic competitor Sarah Logan at the end of 2017. Ray went down on one knee and popped a question to marry him.

Sarah Logan even shared a photo on Instagram of the engagement with a caption saying, I’m going to marry this man with hashtags.

A year later, of their engagement in December.

Raymond and Sarah Are Expecting Their First Child

Wrestler Raymond and Sarah Logon announced that they were expecting their first baby. The couple announced the good news in a YouTube video on their Wild and Free TV YouTube Channel.

Logan posted the good news via Instagram. She said when he met Rowe; she didn’t want kids. On the other hand, the WWE was so excited to be an amazing father. Ray and his wife are so happy that they were having kids and extending their family.

Net Worth of Raymond Rowe

It’s been more than fifteen years; he is wrestling. Raymond Rowe earns a significant worth from his wrestling career. However, wrestlers’ salaries set depending on their league, experience, and ranking. In 2018, his net worth was $500,000.

Raymond’s estimated net worth is said to be between $1 million as of 2020.