Rappers are generally infamous for their ever-busy dating life, which consists of multiple girlfriends. Just when you think they have finally found a girlfriend they are ready to settle with, BOOM, they begin dating someone completely new. Lil’ Wayne can be the perfect example, especially considering how just recently he did another switch on us with a new girlfriend, Denise Bidot.

Find out who is Lil’ Wayne’s new girlfriend, Denise Bidot, is with her career, net worth, and bio. Also, what happened with his last girlfriend?

Meet Denise Bidot; Who is She?

Denise Bidot is a plus-size model, perhaps the most popular one in the USA. She certainly is a rewriter of history, becoming the very first plus-size model to walk multiple runways in the New York Fashion Week of 2014. The ‘Curvy Girls’ star dawned on two straight-brands that were CHROMAT as well as Serena Williams’ HSN fashion line. She currently works for Creative Arts Agency (CAA) in LA and New York. 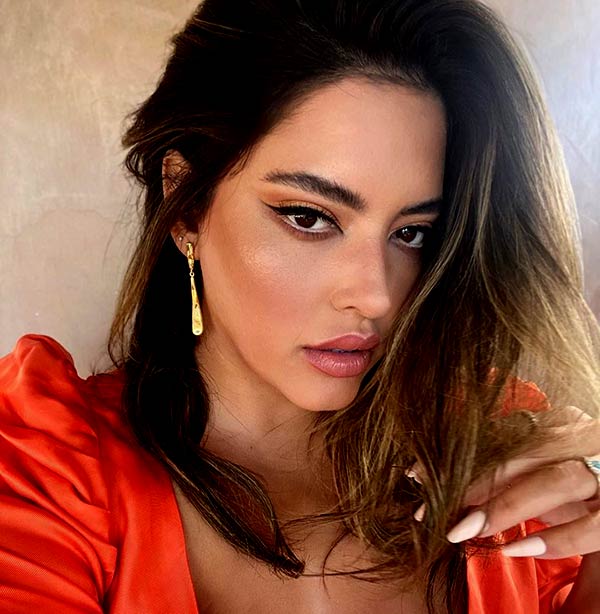 She is also a TV personality with the reality show ‘Curvy Girls.’ However, she also has been part of several other projects like the 2016 documentary ‘Straight/Curve‘ as well as HBO’s series ‘Habla Women’ and the web-series ‘Mama V Mama.’ She also has notable credits for guest-appearing in ‘The Tyra Banks Show’ and ‘The Real,’ which displays a proper scope about her net worth we will reveal below.

Denise Bidot’s Bio; How Old is She?

Denise Bidot was born in Miami, Florida, on June 13, 1986, which makes her 34 years of age. She was born to parents that are of Puerto Rican and Kuwaiti descent despite her ethnically white appearance. While the 34-year-old plus-size model has always been body positive, her Puerto Rican mother was not so lucky.

Her mother struggled with weight issues with things like unsuccessful yo-yo diets that would make her sadder. On the contrary, Bidot, from a young age, felt no need to be skinny to look attractive or feel healthy.

Denise Bidot always dreamed of being an actor and kept trying to land a role since she was 15 years old. She was told to wait a few years and come back when she was 18 years old, which she did only to be rejected once again. Finally, coming to terms with her failure, she chose to become a makeup artist instead. One day she was working with another curvy model on a photoshoot.

The photographer saw her beauty and potential and invited her for some photos as well. Since then, her modeling career took off, and her 2014 history-changing multiple runway walks were just the beginning of her grand career.

She went on to walk in several other significant events all over the world, including London and Copenhagen. In the course, she has also worked with various big name brands like Target, Forever21, Old Navy, Nordstrom, Levi’s, and Macy’s. She also was part of “Beach Body. Not Sorry” campaign from Swimsuits For All.

She was most recently a part of Rihana’s Savage X Fenty lingerie line after she went viral in 2016 for releasing a picture of her in a two-piece swimsuit revealing her stretch marks to the world. So, as you can see, Denise Bidot has an impressive career and a much remarkable net worth. Yes, you may not believe to know that Denise Bidot’s net worth stands at around $1.5 million.

Furthermore, it is only expected to grow after her relationship with rapper Lil’ Wayne, who has a much more significant net worth of nearly $150 million. 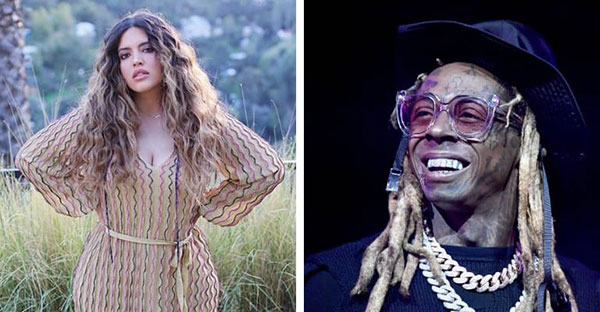 Caption: Denise Bidot is the new girlfriend of Lil Wayne

Denise Bidot revealed herself to be Lil Wayne’s newest girlfriend after she shared a picture of the two gettings cozy on her Instagram story. The post included three vertical photos of the new couple in one of those old photo booth style filters. In the first photo, Lil Wayne is kissing Denise Bidot as she is too caught up in laughter. In the second one, they both have a proper kiss on the lips and then a simple pose on the final one.

“Somehow in the middle of all the madness, something special happened. Us (black heart emoji)”‘ she wrote above the picture. 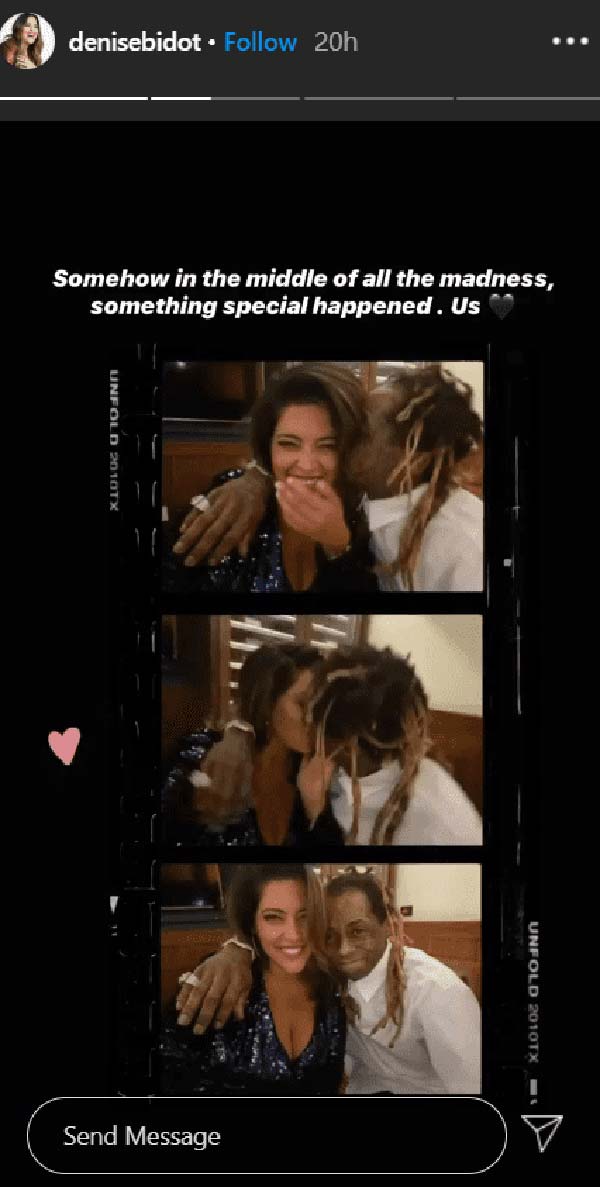 What happened to Lil Wayne Ex-girlfriend?

As happy as we were for Wayne and Bidot, their relationship caught us a little off since we didn’t even know things were officially over between Lil Wayne and his Australian model ex-girlfriend, La’Tecia Thomas. In late 2019, rumors were rising about Thomas and Wayne’s engagement after people saw Thomas sporting an engagement ring on her fingers.

However, in May 2020, news began circulating that the engagement was off. The 37-year-old rapper also met with Denise in 2019, and thus, their dating life could very well be the cause of his previous relationship, but we are not sure yet.

Lil Wayne was born Dwayne Michael Carter Jr. in New Orleans, Louisiana, on September 27, 1982. His rapping career dates back to 1997 when he was just 14 years old and part of the Hot Boys consisting of several other prominent rappers today like Juvenile, Turk, and BG. He has multiple albums to his name like ‘The Block is Hot,’ ‘The Carter (I to V),’ and ‘Rebirth.’

Lil Wayne also has a long dating and married life. He has four children with different women and dealt with the miscarriage of his would-be fifth child from baby mama Trina.

It is too early to say, but we don’t think so. Lil Wayne has had his share of faulty relationships with many women, including his four baby mamas. Let us just stick to the title of girlfriend for now. However, Denise Bidot does have a daughter of her own. Her daughter’s name is Joselyn Adams. We don’t know who her father is yet, but she is just like her father. 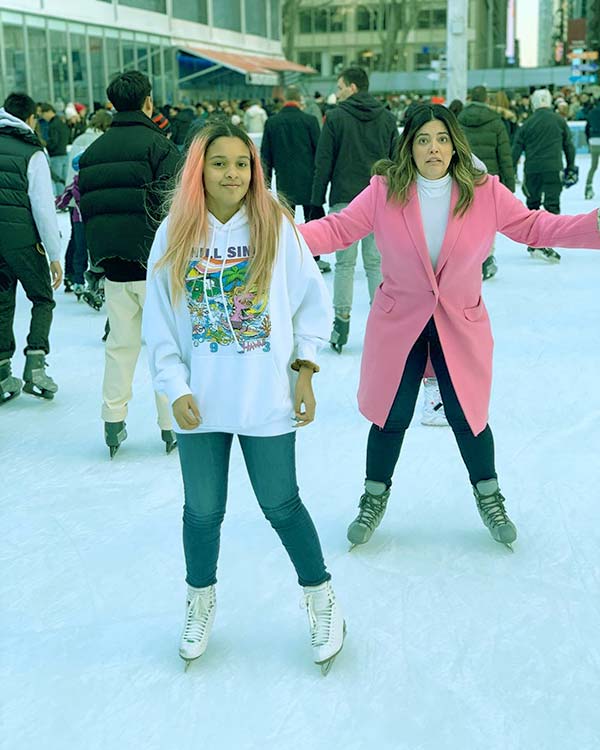 She even joined her mother to walk the ramp for CHROMAT in their Spring/Summer collection of 2020 for the New York Fashion Week 2019. She also frequently appears in her mother’s social media, which shows us that they often spend time together and have a good bond with each other. Perhaps she will form the same kind of a bond with her mother’s boyfriend, Lil Wayne too, who knows?