Lamar Jackson captured the attention of the people around the world after he plays as quarterback for the Baltimore Ravens. But the Ravens quarterback seems intent on keeping his personal life off the record.

Lamar’s skills couldn’t be denied, and eventually, he won several awards for his performance while playing football. Also, he was selected as an All-American as a sophomore in 2016. Since his high school football days, the quarterback has maintained a low profile.

Even though many of his fans are curious to know about his girlfriend, Jamie Taylor, like him, his girlfriend keeps a low profile. However, we have uncovered some detail of Lamar’s girlfriend.

Who is Jaime Taylor?

Jaime Taylor is best known as the girlfriend of the Ravens quarterback, Lamar Jackson. However, it is very little known about her. She is not as famous as her boyfriend. Jaime was born and grew up in the USA and holds American citizenship.

Taylor rarely makes appearances in the media. Further, she hasn’t revealed a piece of single information about her early life, family, and siblings.

Jaime Taylor and Lamar Jackson have been dating for more than two years. She and her boyfriend make a rare appearance in the media. Also, they don’t talk much about their relationship.

Jamie is not as famous as her boyfriend, but she does know how to handle criticism. Taylor said she used to get mad when she read stuff about him. Then she looked at him, and he’s just fine.

Her boyfriend said, let them do the talking. You don’t have to say anything. Just show them. They met in 2017, and since then, they have been together. Lamar hasn’t posted a single photo of the couple on his social media.

Lamar said his girlfriend is a big Harry Potter Fan

In one of the interviews, Jackson said that his girlfriend is a fan of Harry Potter. Lamar even dressed as Harry Potter for Halloween. Also, Jaime’s boyfriend explained about his costume choice to the reporters.

Adding, he said, the costume is pretty cool and his girl to do Harry Potter theme. Also, he admitted that he had watched a few movies but trouble staying awake during the film.

Lamar Jackson started playing football from his high school. Later the athlete was selected 32nd overall in the first round of 2018 NFL Draft by the Ravens. Then he made his NFL debut that year following the injury of Joe Flacco. Jackson is a trailblazer as he was the youngest player to enter a playoff game. 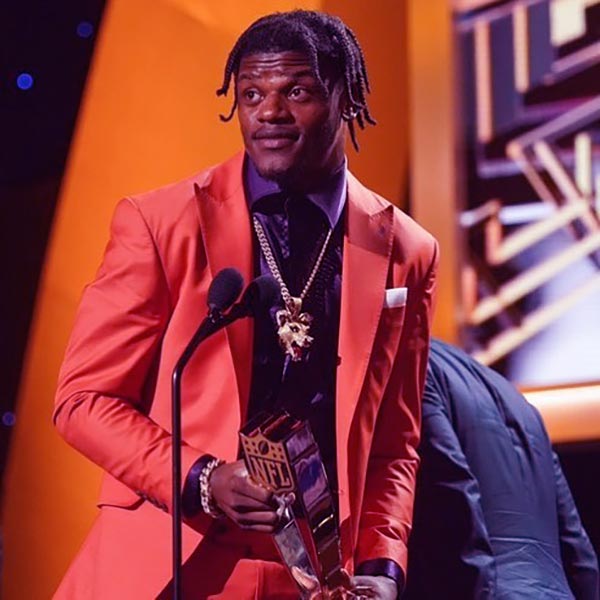 Caption: Lamar Jackson is the quarterback players of the Baltimore Ravens

The Ravens quarterback has been honored with numerous awards and rewards for his outstanding achievements. He was named the NFL Most Valuable Player for 2019 and NFL passing touchdowns leader.

How Much is Jaime Taylor’s Net Worth?

Jaime Taylor became a public figure after she gets involved with Lamar. We don’t know what she does for a living, as well as her educational background. She has kept all of her information to herself, so it hard to predict her income and net worth as well.

On the other hand, Jaime’s boyfriend makes an impressive worth from his NFL career. Lamar Jackson has a whopping net worth of $4 million. According to Spotrac, he earns nearly $5 million from his rookie contract was converted into a signing bonus.

On June 5, 2018, he signed a contract with Baltimore Ravens worth $9.47 million. Aside from that, he makes more money from endorsements and his line of apparel, Era 8.

Jaime’s boyfriend has a Close Relationship With His Mother,

Taylor’s boyfriend, the Ravens quarterback, is very close to his mom, Felica Jones. His mother raised Jackson after his father’s death. The young footballer appointed his mother as his manager rather than hiring an agent during his draft process. 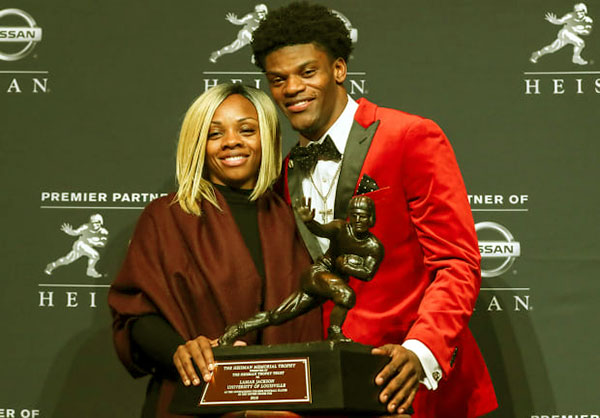 Caption: Lamar hired his mon as his manager during the process of draft

The article was written for The Players’ Tribune, the quarterback, discussed how his mother coach him and his siblings while growing up. He also said how his mom tough for him to play quarterback. His family has paid off for his football career. The way a man treats his mother speaks in great volumes of his character so, his girlfriend must be very proud to have a boyfriend like him.

How old is Jaime Taylor?

Well, Jaime’s birthdate and the place is still a mystery. Lamar’s fans even question about his girlfriend. But Jackson said he and his girlfriend had kept their relationship under the warp. Jackson is 23 years old now. Looking at his age, we can say that she is in her early twenties and enjoying her love life. Also, there is no detail of her body statistics like bust, waist, hip, and shoe size.

Is She on Social media?

As earlier mentioned, she is a secretive person. She doesn’t use any social media applications such as twitter, Instagram not even on Facebook. However, you can check her boyfriend’s social media. His name goes by “@new_era8,” where he has millions of followers.