It’s been a couple of months since the latest season of Project Runway wrapped up, featuring sixteen designers worldwide. Among them, Brittany Allen is one. However, she finished in the top six after winning multiple challenges throughout the show and being a favorite and top contender.

Since the beginning of the show, Brittany’s work is appreciated by the fans and also gets fantastic feedback like they are actually interested in her fashion designing.

Let’s take a look to know about this talented designer, Brittany Allen.

Brittany Allan is from Fort Smith

Brittany Allen was born to American parents in Fort Smith, Arkansas. She has strived for perfection and excellence in her unique designs. After high school graduation, she earned her Bachelor of Science degree from the University of Arkansas and then Master’s of Fine Arts degree with a concentration in fashion design from the Savannah College of Art and Design in 2013. 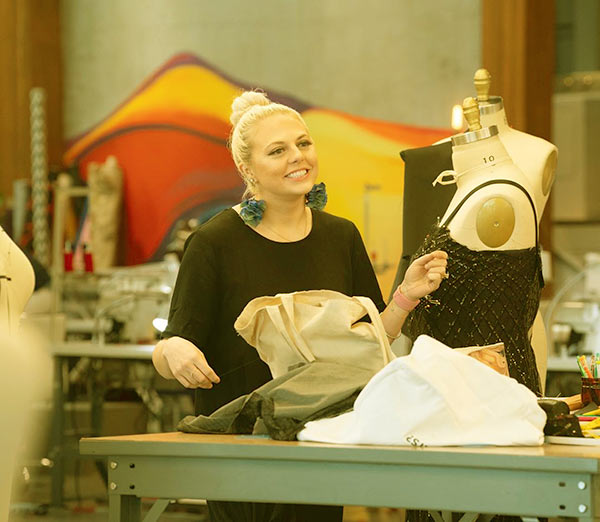 Thereafter, she moved to Austin, Texas, where she is now an adjunct professor of fashion courses at a local university. Allen is currently doing her Ph. D. in Apparel, Merchandising, and Design at the Iowa States.

Allen is a fashion designer and has ten years of experience in this field. She specializes in mix prints designs, accessory designs, and more. She uses all kinds of prints in her designs and not afraid to mix stripes, floral prints, and polka dots. 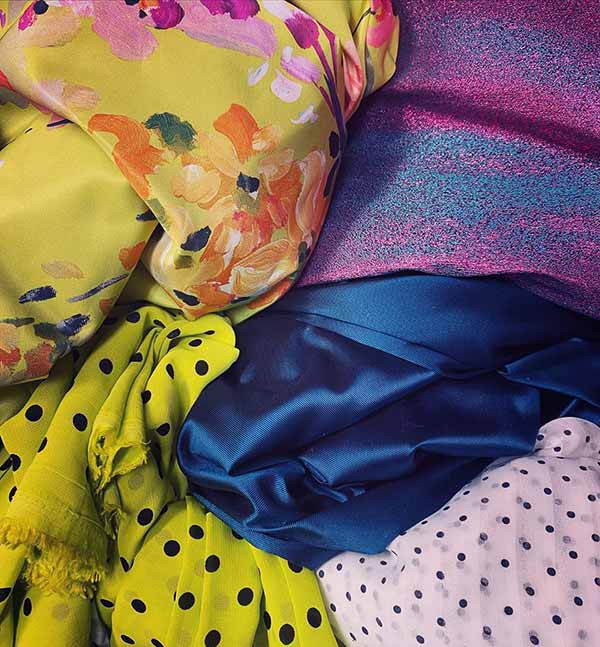 Caption: Allen uses all types of prints that include polka dots, floral, texture, color and so on

The designer describes her aesthetics as very, very loud, very feminine. She said she couldn’t do anything simple and tend to overdesign. It means the designer is prominent in colors and prints.

Allen is one of 16 selected to compete on Bravo’s reality show Project Runway. She appeared as a contestant in season 18 and is a testament to anyone to be fearless in pursuing your dreams. Since her first challenges, she stayed true to her aesthetic design. Fans appreciate her works. 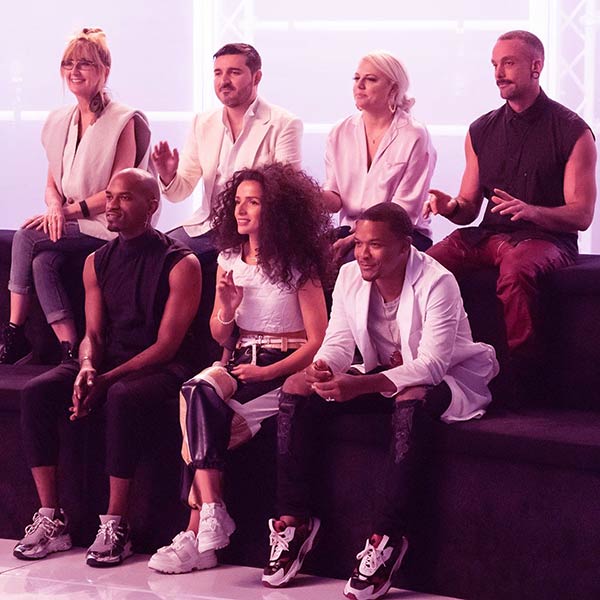 Caption: Brittany with others contestant on Project Runway Season 18

Her designs have been worn by Oscar-winning singer Lady Gaga and Rock and roll Hall of Fame member Jon Bon Jovi. She designed a bomber jacket worn by Lady Gaga, and Jon Bon Jovi wore cowboy boots. After making her appearance in the reality show, she gained both fame and fortune that helps to boost her career.

let me tell y’all about @kimrhode 🇺🇸 • Kim is an American double trap and skeet shooter. She is a six-time Olympic medal winner, including three gold medals, and six-time national champion in double trap. She is the most successful female shooter at the Olympics as the only triple Olympic Champion and the only woman to have won two Olympic gold medals for Double Trap. She won a gold medal in skeet shooting at the 2012 Summer Olympics, equaling the world record of 99 out of 100 clays. • Kim, i’m so proud of what we created, and the most important thing to me was seeing you happy with your victory dress! now, go kick some butt in Tokyo, and have the most fab night out with your hubs! 😉 you are a gorgeous person inside and out, and I’m lucky to have worked with someone so accomplished and inspiring! • • • #projectrunway #runway #pr18 #season18 #designerbrittany #teambrittany #bravotv #bravo #fashion #designer #fashiondesigner #austin #newyork #mood #spring #summer #fabric #textile #pink #art #fun #girly #follow #like #realhousewivesofprojectrunway #brittanyallen

But fortunately, she didn’t make it finale and Nancy Geoffery Mac won the season 18. She was eliminated in an episode of ‘Suit Yourself’ by the judges despite her excellent work. But Christian Siriano used his first-ever Siriano Save to keep her in the competition. 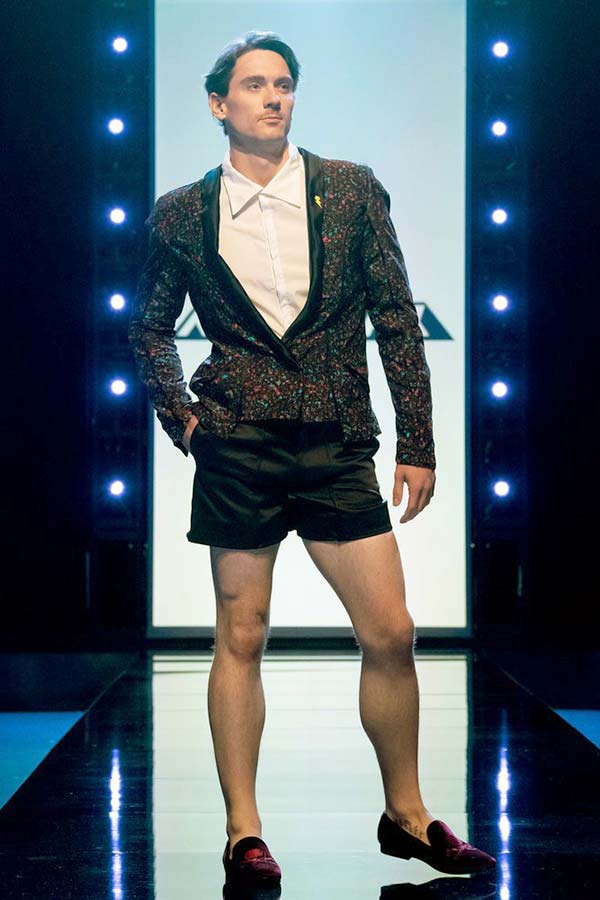 Caption: Brittany Allen attempt her first at menswear but eliminated for this look

The Project Runway star is helping the Americans by providing large masks to fight against the pandemic coronavirus. Allen said she is now working almost nonstop, creating face masks for doctors, nurses, and peoples.

A few days ago, she posted about it on her Instagram, the request for masks came pouring from across the nation. She posted a picture of herself wearing a mask that made along with her team. Allen wrote, she’s gotten over a thousand dollars in donations from Instagram and able to buy materials, thread and elastic. Also, she was able to pay for shipping for local triage centers, hospitals, clinics, all over the country.

I have an OVERWHELMING amount of DMs and comments on all of my posts. I appreciate everyone support and donations while I sew as fast as I can. However, it is literally impossible for me to keep up with the 100s of places people are sending in their requests. Because of this, I have setup a system where you can go to my website and put in a request for the face mask covers. The reasoning for this is obviously to keep it more organized but also, we assume no liability for the wearing of these mask covers. These are not FDA approved, and I need those who are requesting them to submit to that. To put in a request, please CLICK ON THE LINK IN MY BIO. If you have already sent me a DM or submitted on my story, please go and do it again on my website. It really helps me keep it all under control! Thanks for your understanding!

The designer added, she also got requests from California, Arkansas, as well as New York. Additionally, Allen’s mentor Christian Siriano making masks due to the shortage.

Brittany is the Founder of Brittany-Nicole

Brittany Allen is launched her own brand, Brittany-Nicole, in 2013 in Fort Smith. Later she relocated the brand to Austin, Texas. Also, she is the CEO and creative director of her brand. It is a contemporary ready-to-wear brand inspired by and created especially for women. Allen describes her brand as if Dolly Parton and Betsey Johnson had a baby who was then raised by Anna Wintour.

Fashion designer Allen designed a draped pattern and produced women’s wear collections for the fashion label. According to Brittany’s word, being an independent, powerful, and motivated female, it doesn’t mean sacrificing your freedom but be who you are and wear what you want.

Before launching her brand, she worked in many companies in various positions. Previously, she worked as CAD & Apparel designer for two years and eleven months in Between Ten in Los Angeles, California.

Also, she worked in Understated Leather as a CAD Designer & Patternmaker from February 2016 to January 2019 in Austin, Texas.

Not only that, but she also worked as a Creative Director for Trunkist for five months. Moreover, as a full-time professor, she served from October 2016 to October 2018 at The Art Institutes.

Who is Brittany Allen’s Husband?

Despite being a famous fashion designer, she has managed to put her personal life away from the media and paparazzi. Further, she hasn’t posted a single photo with her husband, Derek, on her social profiles.

Talking about her children, it is unknown whether she has kids or not. But the couple has two pets and currently lives in a beautiful home in Austin, Texas.

How Much is Brittany Allen’s Net Worth?

There’s no doubt that the Project Runway star earns a significant worth from her designing. She accumulates more than a million over a decade. The local fashion designer became a celebrity after she stepped on the reality show Project Runway.

Moving to Austin with her husband in 2015, she welcomed artistic locals with open arms. After graduation, Allen got her first job as a stylist at Product Photography Stylist in Fayetteville, Arkansas Area where she worked for about four months. She makes a good income from her brand as well. Every year, she launches two-three collections of her own.

She is an Active Social media User

Also, you can visit her website for further information as well as shop all products such as tops, dresses, accessories, jewelry, outwears, gift cards, and more.