Swamp People has made a return to History Channel with its 11th season. The reality show follows the descendants of French Canadians in Louisiana as they struggle to live their life in the Atchafalaya Basin during the alligator hunting season.

Ashley Jones is one of the cast members of Swamp People who grabbed all the attention of the viewers towards during her debut in season 10. She is a partner with Ronnie Adams. Some of the fans think that Ashley and Ronnie are couples, but actually, they are not.

Who is Ashley Jones?

Ashley Jones is a reality star. She became a public figure after she appeared as a cast member of Swamp People in January 2019. Now, she is back for the new season of Swamp People that starts from January 23rd, 2020. During the season 11 premiered, Ashley watched the show unfold among the crowd.

She told WJTV, alligator hunting is always going to be fun, but when someone can film it and watch it, it’s cool. She added, this new season is going to be the best season there’s ever been. 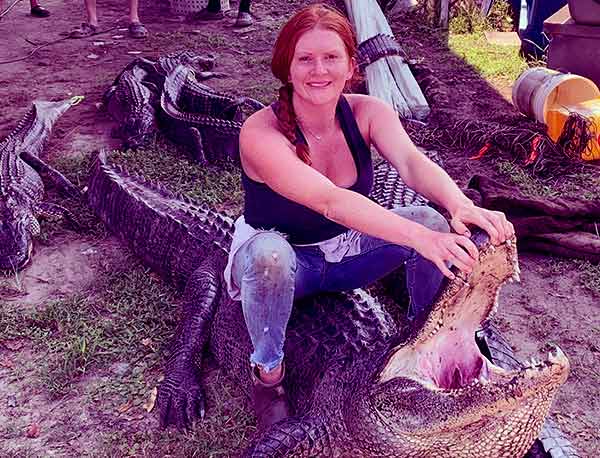 In the previous season, she hunted lots of alligators, but this isn’t as easy as you see on the television. In season 11: Return to Foggy Bayou, she teamed up with Troy for a day, and it turns out the only thing bigger than alligators are their personalities.

Watch a video below.

Ashley Jones Battled With Depression After Her Miscarriage

Swamp People cast Ashley opened up about her depression after a tragic miscarriage to The Clarion-Ledger in February 2019. About six years, she experienced a miscarriage, and that led her into a deep depression.

Ashley said that she was in depression for three months without even knowing it. She added, it was like she was dead inside and going through the motions of life without any ambition. The reason behind her miscarriage was a hormonal imbalance.

Ashley Jones is a Married Woman

The reality star Ashley tied the knot to Chad Jones, a businessman. Like her, Ashley’s husband has a passion for hunting but not a regular hunter. Chad has his firm, “The Jones Law Firm, PC,” that provides legal service to clients. He also has a Facebook account as @chadjoneslawfirm, where he shares new updates about him and his family. 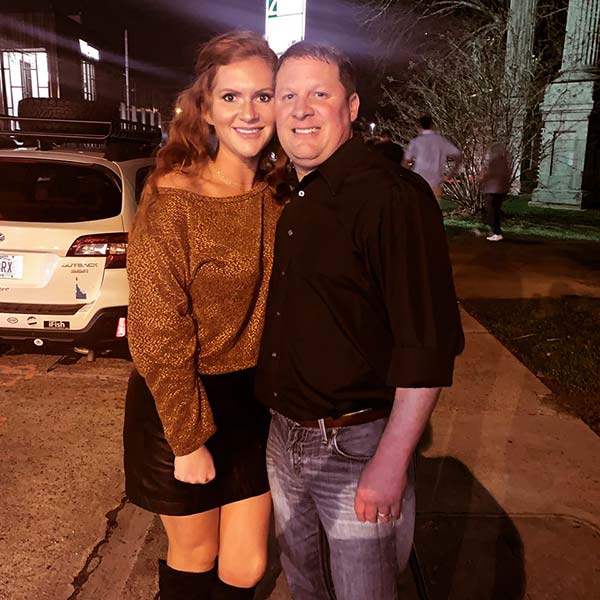 Chad and Ashley both love hunting and fishing. In their free time, they go hunting with their kids. Her husband shared a photo of him on his Facebook account with a caption. 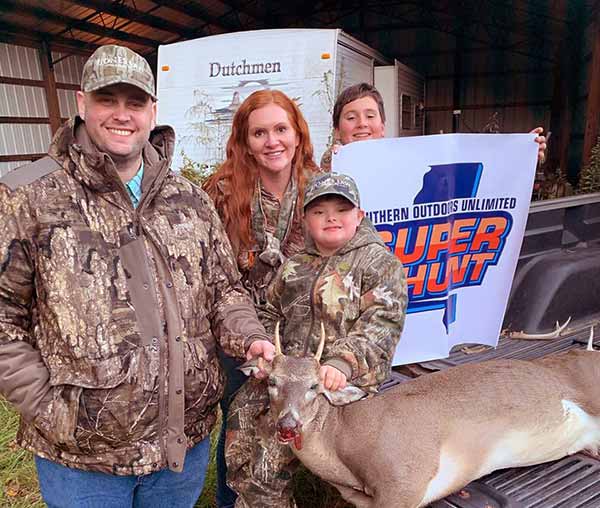 Caption: Chad and Ahsley hunting with their kids

However, none of them opened their marriage date and venue to the public. But we cab assume that they been married for more than 15 years and still have a good understanding and loyal to each other.

Ashley Jones has three children, two sons, and a daughter. She even shares some of the photos of her children on her social accounts. The family of five celebrated Christmas with their close friends and family in 2019.

Also, Swamp People star posted a family photo on her social media and captioned it,

“Merry Chirstmas from the Jones Family.” 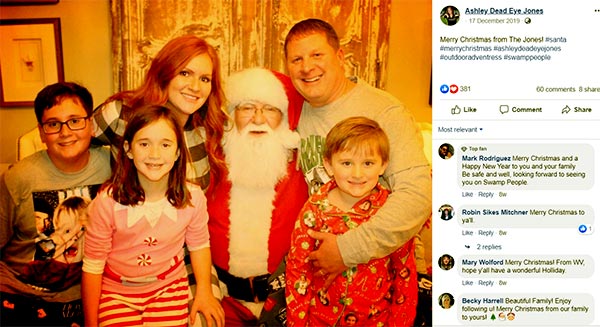 Caption: Ashley Jones with husband Chad and with their kids celebrating Christmas 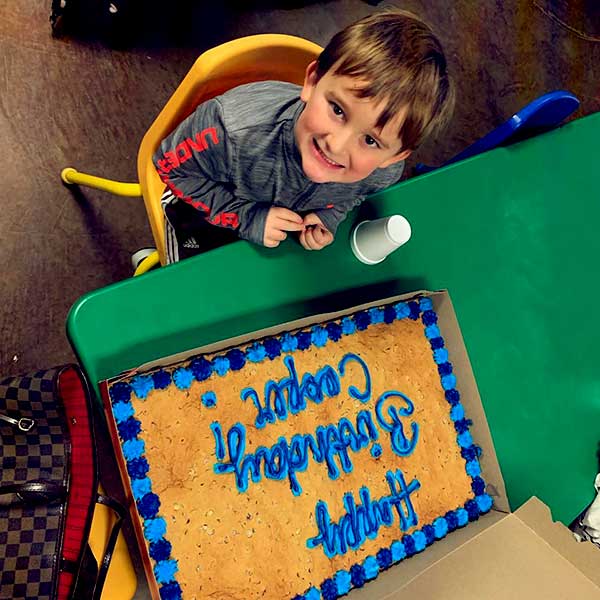 Further, the family has a new pet, a tortoise, and they named it, Crackit. 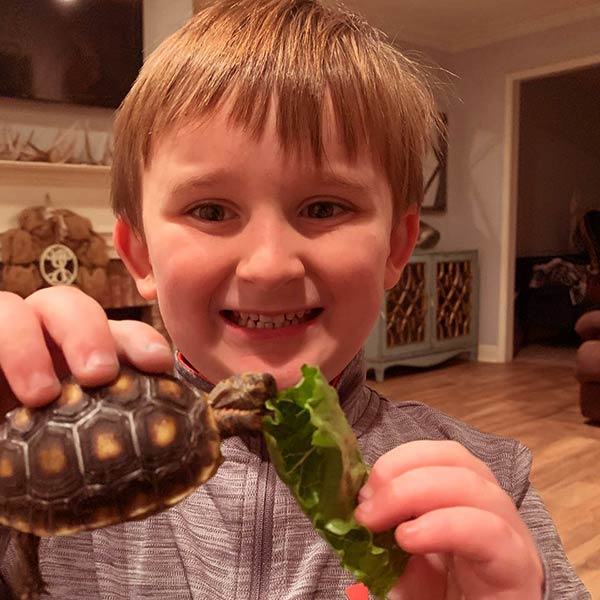 Ashley Jones is also known as ‘Dead Eye.’ Since her appearance in the show, Ashley has been showing her skills. She is known for her perfect shot, while others need to target down with many chances.

How Much Ashley Jones Makes Per Episodes from Swamp People?

Ashleys is a mom with a passion for hunting, especially wild hogs. Alligator has always been a way for her to make a living. Jones earns a salary between $10,000 to $30,000 per episode from Swamp People. 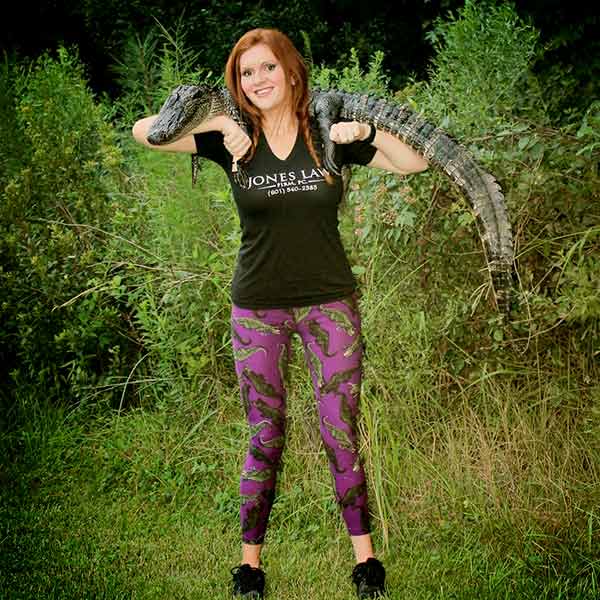 So, it is sure that Ashley summons above a million in one season. There’s no doubt, Ashley Jones has not less than a million net worth. To date, we couldn’t find her actual net worth. We will update as we get it, till then, keep visiting on our page.

Where is Ashley Hailed From?

According to relevant sources, Ashley Jones was born on November 25th, but the actual date of the year remains unknown. As such, we can speculate about her age. Looking at her pictures, she seems to be enjoying her mid-thirties.

She has brown dyed hair and a pair of beautiful brown eyes. Being a mother of three kids, she has maintained her curvy figure.

Jones uses her social networking sites such as Twitter, Facebook, as well as Instagram to shares photos and videos of her hunts and trophies along with her castmates, family, and friends.

What do y’all like to do on rainy days?? 2 more days until the new episode of #swamppeople on #historychannel

Also, she interacts directly with her fans through her social media, which is cool.