Alaskan Bush People is the most-watched reality show in the Discovery Channel. The show follows the life of the Brown family as they live in the wilderness. The family tries their best to survive on the Alaskan frontier by hunting, fishing, building houses, and shooting at bears.

The show has come a long way since then, including events like the matriarch Ami Brown’s Cancer Ordeal, which would end up for the Brown family to move from Alaska to Washington. So, it would be wise to get a hold of things right now before anything significant happens.

Read on to find out about all of the Alaskan Bush People cast with their net worth.

Billy Bryan Brown is the cast member of the show, as he is centered on his family. The reality star, was born on December 3, 1952, in Forth, Texas. He is the Patriarch of the family who was brought up in an upper-middle-class family. When he was 16, his parents and sister died in a plane crash. 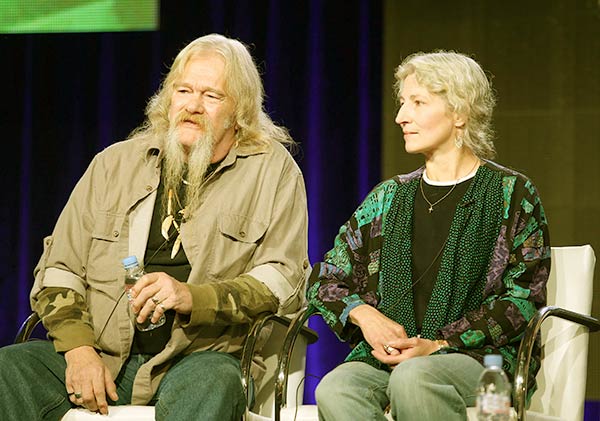 Caption: Billy Brown and wife Ami Brown are the head of the family

According to Billy, he gave up his right to the family fortune and spent years wandering the States. Additionally, he worked as a commercial fisherman in the northern Pacific. Billy’s estimated net worth is about $1 million. This revenue comes from the leading actor in the show. In addition to his career, he is an author of a book titled One Wave at a Time that was released in September 2007.

According to Country Living, Billy has some health complications. Subsequently, he underwent surgery. Bear shared a video on his Instagram account on which he spoken about his father’s health issues. He said his father has suffered from a seizure in the past, which also caught on camera and shown on Alaskan Bush People in 2015.

After his wife’s cancer, the Brown Family shifted to a $5,00,000 lakefront mansion in Omak, Washinton. The home has ten bedrooms which have shown on season 8.

Caption: After Ami’s cancer crisis, the Brown family went on to live in a lakefront mansion in Omak, Washington

Before living there, the family lives in a $2.8 million Beverly Hills, California, mansion. It featured five bedrooms, four bathrooms, a master suite equipped with a Jacuzzi, and an in-ground pool. 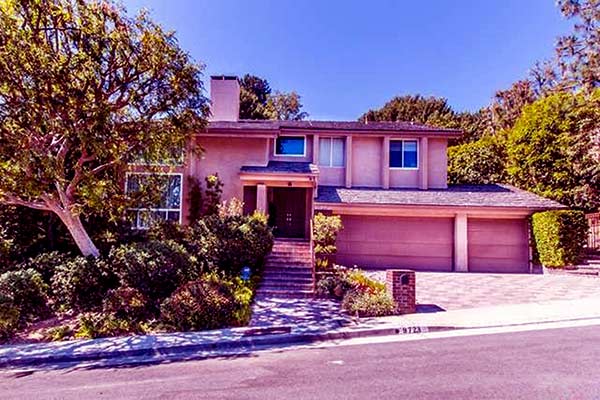 Caption: The Brown family lived in the 3,382 square-foot mansion in Beverly Hills before moving to a lakefront mansion

Ami Brown is the wife of Bill Brown. She was born with the name Amora Larene Branson Brown on August 28, 1963. She came to limelight after appearing the Discovery’s Alaskan Bush People along with her family. 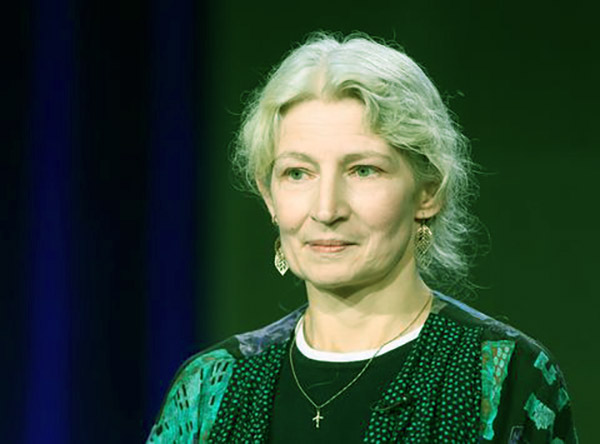 Ami raised in a family of alcoholics. Ami met Billy in the 1970s in Texas and tied the knot in 1979. Before the fame, she did nine to five jobs, and later they headed off to Alaska in 1983. In 2014, Mrs. Brown made her debut on the television and earned both fame and fortune.

In 2017, Amy was diagnosed with Stage III lung cancer. At the time, she disclosed she was given a three percent of living. Ami underwent intense radiation and chemo treatments that resulted, she lost 77 pounds though her health has improved and still has to take precautions.

On the other hand, fans tool social media and claimed that the mom of seven faked her cancer for the show’s ratings. Later. To shut down the false rumors, the doctors’ team released a statement to PEOPLE about her diagnosis and treatments.

She earns thousands of dollars from the show, but the actual salary is still not known. Ami Brown has a net worth of approximately $5,00,000.

Matthew Jeremiah Brown, first-born child of Billy and Ami, on September 7, 1982. He came to limelight after making his appearance in Alaskan Bush People, but he has been absent from the show since season 8, much to the disappointment of viewers. 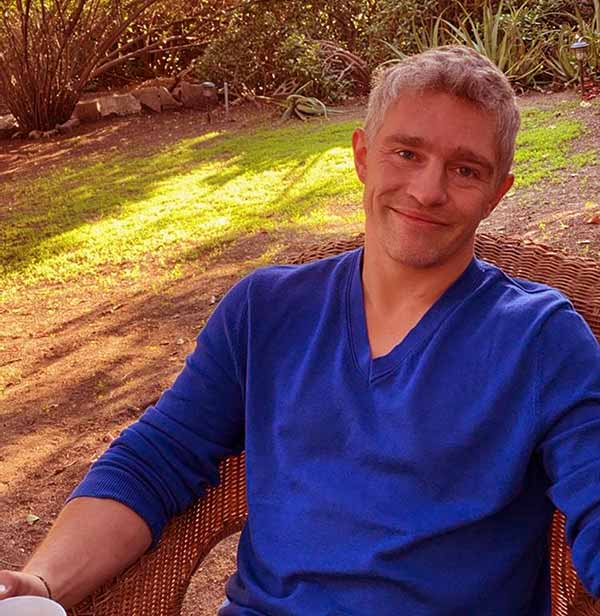 Matt grew up in the wilderness and started fishing at the age of four. By age 10, he was a fully-fledged hunter. Matt’s struggled with alcohol as an adult and first went to rehab in 2016. However, he recovers soon after. The reality start went the second time to rehab in 2018 and left rehab after six months, receiving treatment.

During the appearance in the show, he makes a pretty good salary that added to his net worth. Matt Brown’s net worth is averaged around $150,000. Continuos estimations and reports suggesting Matt Brown’s return are up in the discussion for months now, but he has yet to make his return to the series.

Joshua Bam Bam Brown, aka Bam Bam Brown, was born on September 18, 1984. He is the second eldest son of Billy and Ami and grew up in the family’s fishing boat. Bam Bam has a passion in the electrical field and reading book. 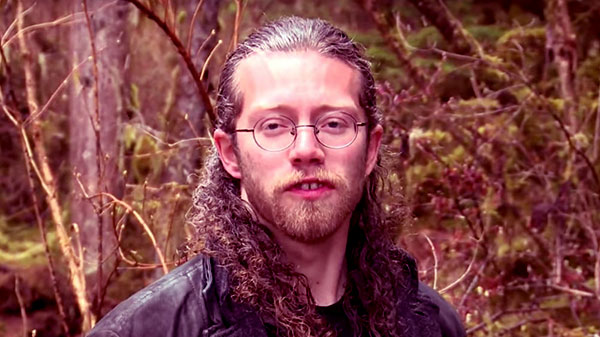 Professionally, Bam Bam is a reality star and makes a significant salary from the show. Bam net worth is said to be around $300,000. However, he has moved away from the Alaskan wilderness and begun his own business.

Bear Brown is another cast member of Alaskan Bush People. He is the third son of the Brown family. His real name is Solomon Isaiah Freedom Brown, born on June 10, 1987. Bear grew up in the wilderness of Alaskan land. 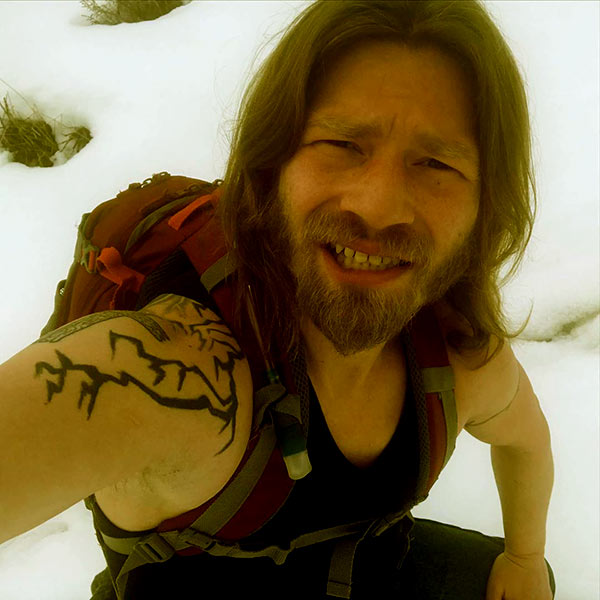 Caption: Bear Brown is very much hunter in the Brown family

The reality star is an avid hunter and is in charge of finding meat for the family. The 33 years old often tracking animals in Alaska and has been injured several times.

Furthermore, the reality star has a passion for filming and even produced his own movies that include Fear No Evil. Besides his personal social accounts, he runs another Instagram account related to a film called “@fearnoevilthemovie,” where he over 3k followers.

Through the season, Bear made numerous headlines after his ex-fiance, Raivan Adams filed a restraining order along with the documents that claimed he threatened her with a gun and his abusive behavior due to cocaine use.

Bear brown earns about $20,000 per episode from the show. However, Bear’s estimated net worth is similar to his oldest brother, Matt Brown, around $150,000.

Gabriel Starbuck Brown, aka Gabe Brown, was born on December 15, 1989, and grew up along with his siblings in the wilderness. The 31 years old is part of the Alaskan Bush People. Gabriel follows the footstep of his father, Billy, and is also a great fisherman. 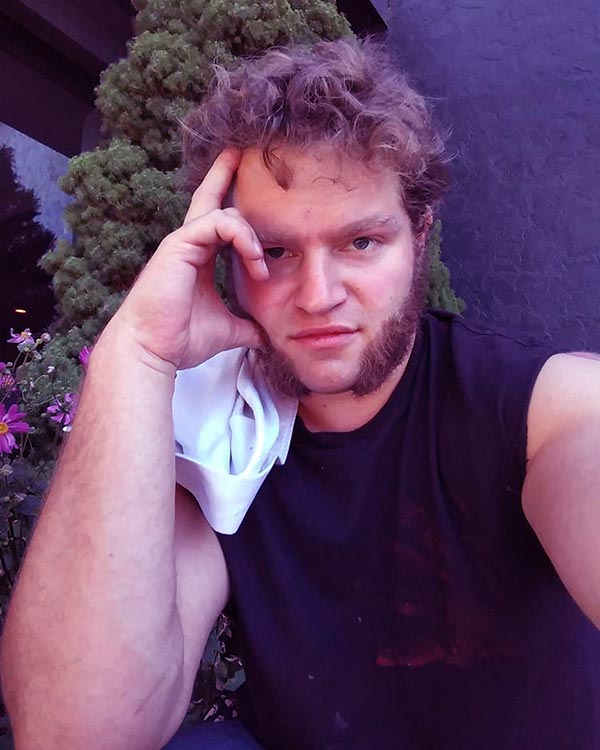 Caption: The fourth son of the Brown family

Besides, he is a painter and draws realistic versions of animals. Many viewers of the show talked about his braces. That it looked cute on him, and others like a puppy with braces. However, he managed to keep those braces looking appealing to those taken by his unique personality. 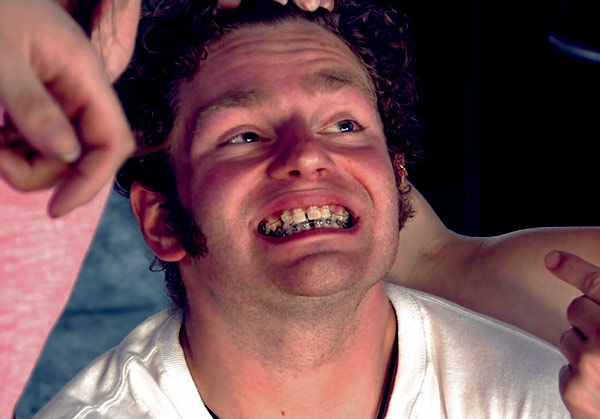 Caption: Gabe Brown braces looking appealing to those taken by his extraordinary personality.

During the show, he revealed that he has been dealing with a deadly disease. Brown said he has been battling with a streptococcal virus. The reality star can’t move ten feet without having to lie back down and bedridden for weeks. Now, he is in good condition and living a healthy life with his family.

Gabe is a married man. He is married to Racquell Rose Pantilla. The couple announced that via social media that they were expecting their first child. Also, they announced the date of their baby as November 10, 2019, although there is no news of the newly born child on the site or any media outlets.

Noah Brown is widely known as “Mr. Fix-It” who appears as a regular cast member on the show along with his family in May 2014. His birth name is Noah Darkcloud Brown, born on 18, 1992, the youngest son of Billy and Ami Brown. 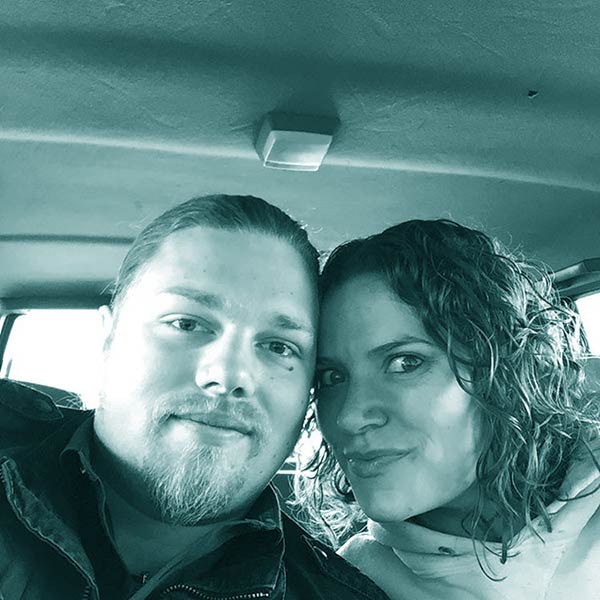 From an early age, Noah liked to take things apart and put them together. He is the tech-savvy member of the Brown family and uses his gadgets to make his family’s life better.

The 24 years old reality star tied the nuptials to his longterm girlfriend Rahain Alicia in 2018 in Idaho People reported, Alaskan Bush-Brown star Noah Brown and Rhain Alicia were blessed with their first child on February 26, 2019. The couple names their children, Elijah Connor Brown, and now, he is one year old. 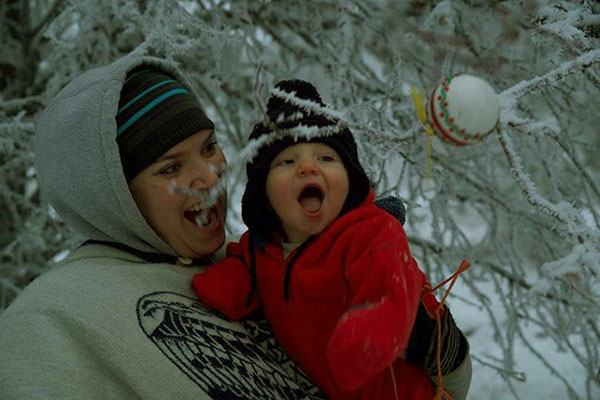 Noah made his first appearance on Alaskan Bush People on May 6, 2015, in the pilot episode. He earns quite a good buck. According to reliable sources, Noah earns an annual salary of above $60,000 from the reality show. Moreover, the estimated net worth of Noah Brown is $1,00,000.

Birdy Brown is the girl of the Brown family. She was born on November 18, 1994, and is 26 years old. Her maiden name is Amora Jean Snowbird Brown. Birdy is famous for her crooked and not so teeth on Alaskan Bush People. 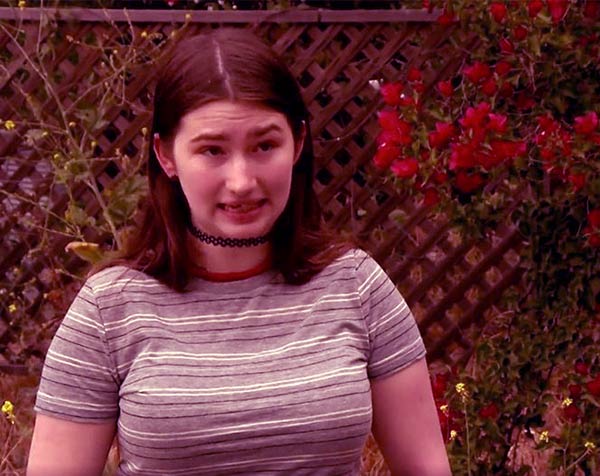 Caption: Birdy Brown is famous for her crooked teeth on Alaskan Bush People

Talking about her hobbies, she loves climbing the mountain and hunting. She is a tough girl and can handle every situation very well. Furthermore, Snowbird is an adventurous girl who enjoys exploring the wilderness of Alaska rather than showing off like shopping and fashion wear.

In addition, she is a pet lover; notably, she loves cats so much. She has 20 cats. Also, Birdy has collected the cat’s hair and made a cat pillow from it. The reality star has been in the show for a long time. Reportedly, Bird Brown’s net worth is said to be $100,000.

Aside from the show, Snowbird is currently unmarried and doesn’t have any kids yet. However, Birdy was rumored to be pregnant when she gained such weight rapidly. Later, she claimed the pregnancy news is false. She is still single and rocking her life on her own rules.

Rainy Brown is the youngest member of the Alaskan Bush Family and the baby of the Brown family. Rainy’s real name is Merry Christman Kathryn Raindrop Brown and born on November 23, 2002. 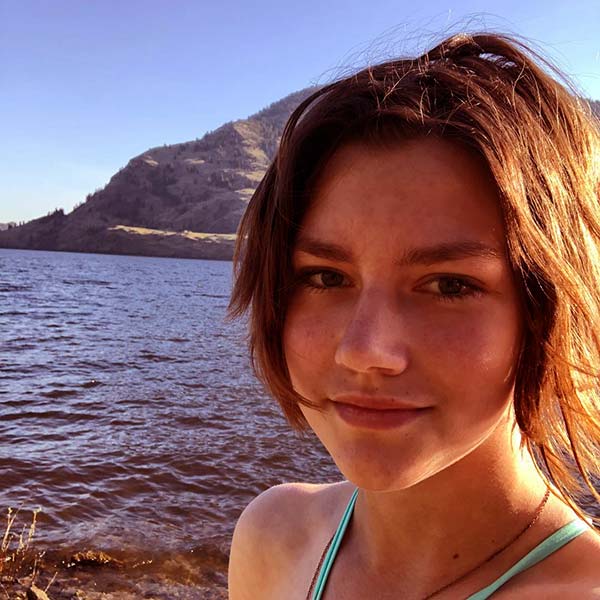 Caption: Rainy Brown is the youngest child of Ami and Billy Brown

The 18 years old possess multiple talents, including reading, sculpting, and music. She plays the Ukulele and very open with her fans. Rainy refers to herself as “rainbows” and also no afraid to tackle rumors about herself. Dealing with internet trolls is nothing to her.

In 2019, she took to social media and started questioning the youngster’s sexuality, “Are you gay?” Later she decided to address the rumor; she commented, no, I’m straight.

Despite being the youngest member of Brown’s family, she makes a good fortune from the show. Rainy reportedly receives between $8000-$15,000 per episode. She lives with her family, but the net worth of her is still under wrap. In addition to her career, Rain is an inspirational writer and a full-time warrior. For more info about her, check out her on Instagram as “@heroofkirrwell.”

Due to the popularity of the show, Brown’s family was able to live in Los Angeles home for a few months while Amile was battling with lung cancer. Now, they have bought nearly 500 acres of land in Tonasket, Washington.

Reportedly, Billy purchased the land which sits on a 4,000 square foot high mountain that worth $415,000. Also, Billy bought the four different properties near at the Lode on Palmer lake. According to Rader Online, One of the features is 65 acres, while another one is 140 acres.